The City of Charlottetown is encouraging residents and businesses to complete a newly launched survey aimed at gauging current attitude on single use plastic items.

Single-use plastics, such as straws, stir sticks, and food take-away containers are manufactured for the purpose of being used only once usually for a brief period but unfortunately these items persist in the natural environment for hundreds of years. About a third of the three million tonnes of plastic waste generated by Canadians annually is comprised of single-use plastic products and packaging.  The prevalence of these and other plastic items within the global economy has led to significant environmental concerns for marine species and environments.

The City has developed an online survey to collect feedback from residents and businesses on the topic of single-use plastics.

The City of Charlottetown would greatly appreciate responses from members of the Greater Charlottetown Area Chamber of Commerce, as the feedback of business owner/operators will help them determine how best to support businesses in a transition toward a lower-waste society.  The survey is open until August 29th, 2019. 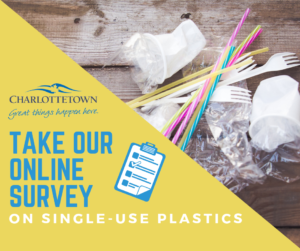