Charlottetown, PE – Wednesday evening was a night of celebration for the Greater Charlottetown Area Chamber of Commerce as they hosted the 15th annual President’s Excellence Awards at the Delta Prince Edward by Marriott. In addition to hosting guests in person, the gala was presented virtually on the Chamber’s Facebook page.

The Not-for-Profit Excellence Award, sponsored by iWave, was awarded to the Canadian Mental Health Association (PEI Division). This award recognizes an organization’s accomplishments in the not-for-profit sector that contributes to the economic, social and/or cultural well-being of the Greater Charlottetown Area. Other finalists included the Kiwanis Club of Charlottetown and The Upper Room Hospitality Ministry Food Bank & Soup Kitchen.

Hunter’s Ale House was the recipient of the Excellence in Customer Service Award, co-sponsored by BDO Canada LLP and Cox & Palmer, for showing a strong commitment to outstanding customer service, customer loyalty, community involvement and having demonstrated innovation within the sector. Finalists in this category were Charlottetown Home Hardware and Glasgow Hills Resort & Golf Club.

In recognition of their efforts in providing employees with a positive, healthy and productive workplace, Upstreet Craft Brewing was presented the Workplace Excellence Award. Glasgow Hills Resort & Golf Club and Receiver Coffee Company were the other finalists for this award.

The inaugural Excellence in Collaboration Award, sponsored by the Confederation Centre of the Arts, recognizes two or more uniquely owned businesses that displayed innovation and resiliency during the COVID-19 pandemic by forming a new partnership to deliver a successful and unique product and/or service. This new award was presented to 3rd Degree Training. Other finalists for the award included Piatto Pizzeria+Enoteca Charlottetown and Terry’s Berries.

The Volunteer Excellence Award, sponsored by Maritime Electric, was presented to Jennifer Evans, who has been a tireless volunteer with the Chamber. This award recognizes someone whose time, commitment and contributions to the Chamber have been outstanding and is chosen by the Chamber’s Board of Directors’ Executive Committee.

Also new this year, the Excellence in Adaptation and Resiliency Award, sponsored by BioVectra, recognizes a business that has shown resiliency in the face of adversity by introducing or improving a product/service to better respond to the environment caused by the COVID-19 pandemic. In 2021, it was awarded to Copper Bottom Brewing. Finalists in this category included MacKinnon’s Lobster Pound – Lobster on the Wharf and Terry’s Berries.

The Emerging Business Excellence Award, sponsored by the City of Charlottetown, is given to a business that has been operating for two to five years has demonstrated remarkable growth, innovation, and leadership in their industry sector. HOPYARD was the winner in this category. Leading Edge Group and Odyssey Virtual were also finalists.

Decided by an online public vote, the People’s Choice for Community Impact Award, sponsored by MRSB Group, went to Wendell Taylor’s Garage. This award recognizes a small, locally owned and operated business that has earned an engaged and loyal following and support from the community. Other award finalists were Leading Edge Group and Upstreet Craft Brewing.

This year’s Entrepreneur of the Year Award was presented to Liam and Kim Dolan. Liam and Kim have been active members in the community, volunteering their time with events and advancing the food and beverage industry locally and nationally. Provincial Credit Union sponsors the award.

The winner of the Excellence in Business Award was Maximus Canada – DeltaWare Division, recognizing excellence in all areas of their business operations. The runners-up in this category included JEMS Boutique and Wendell Taylor’s Garage. 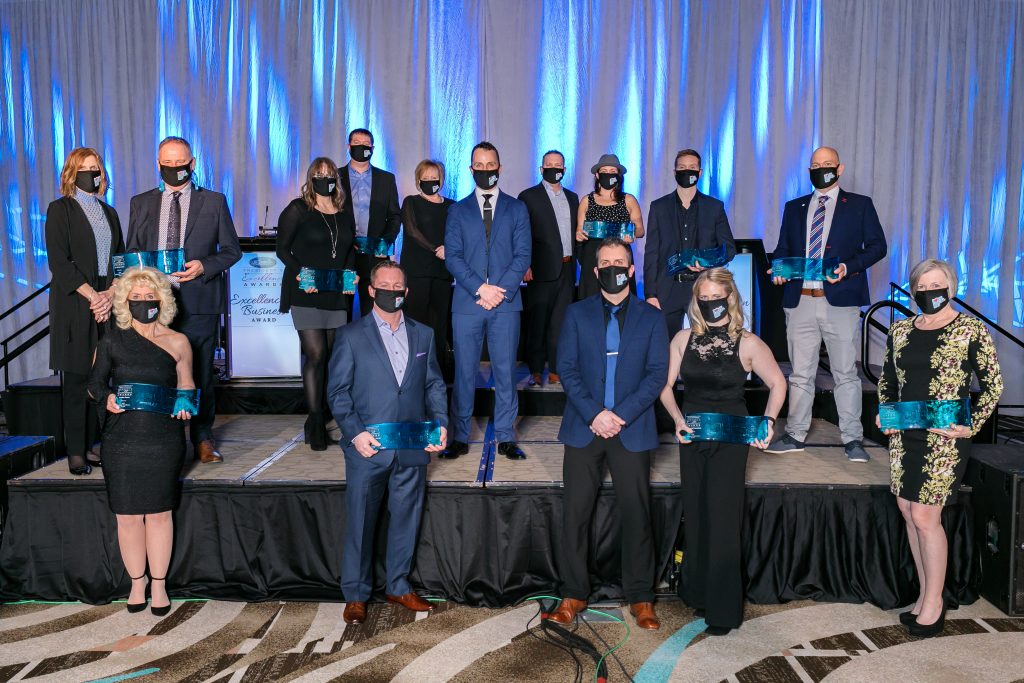